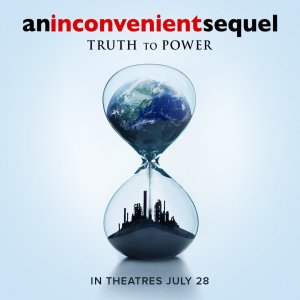 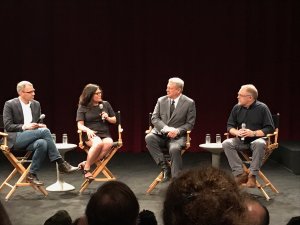 An Inconvenient sequel: Truth to Power is a ‘follow’ movie in the true sense of the word. Not only is it the follow-up documentary to Al Gore’s hard-hitting An Inconvenient Truth, but this time round we get to ‘follow’ Gore on a worldwide tour of the disastrous consequences of climate change– from the dripping icecaps of Greenland to the rain bombs of India and the flooding streets of Miami. He travels the world teaching future climate leaders. We witness change in action at the 2016 Paris Accord as Gore brokers a deal between developing country, India and SolarCity, the world’s leading manufacturer of solar panels, a turning point in getting India to agree to the Accord. There are heart warming moments— Georgetown, Texas “the reddest city, in the reddest county” is about to get 100 percent of its energy from wind and solar; Gore and conservative Republican mayor celebrate a victory for renewable energy.  This is an emotional journey for Gore and he admits to sometimes feeling “it was a personal failure on my part” that the world’s leaders were not stepping up. Despite the harrowing visuals, grim statistics and the trump-astrophe of November 2016, this is an overwhelmingly positive film.  We’re immersed in Gore’s journey, inspired by his passion and dedication. Most importantly, we witness that change is possible; we have a responsibility to halt the effects of climate change. Use your voice. Use your choice. Use your vote. #beinconvenient