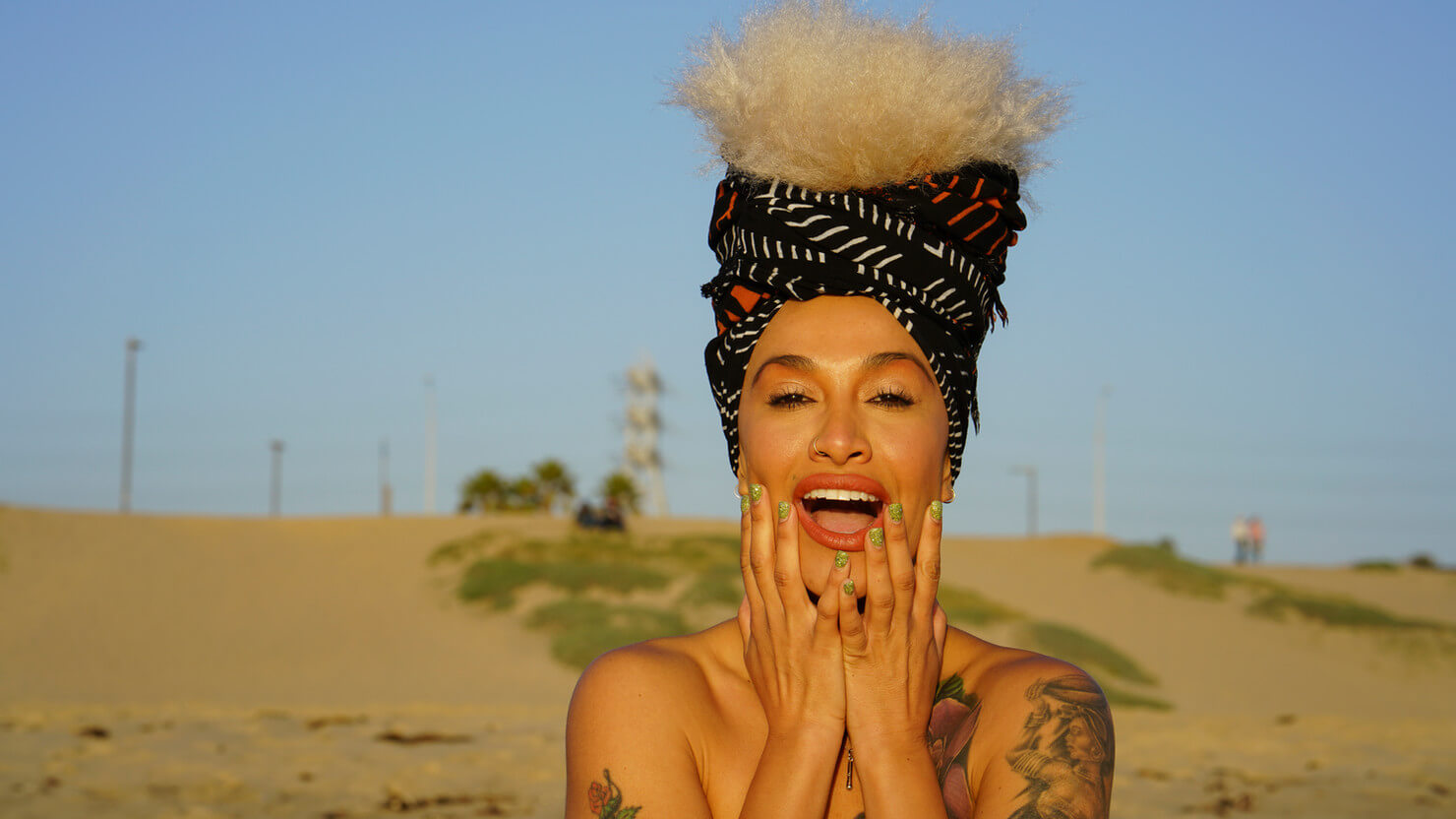 Every once in a while, someone brings to music a voice, a sound, a note or a chord that is different. Enter Lady Blackbird, who back in 2020, brought to the ears of the world, the song, Blackbird. A composition written and sung by Nina Simone, Lady Blackbird delivered a vocal that on first impression, felt like Nina Simone was alive and well.

The LA-based artist, who formally was known as Marley Munroe has re-invented herself, and we like it. That song and now an album, Black Acid Soul, and to our delight she joins Vintage Trouble for a night at the Ford Theater on Thursday, September 16th. For tickets head here.

If you are fan of jazz, of crazy orchestrations that sound like the soundtrack of a dark, smoky night in a Southside joint, with vocals that may instill a permanent awe of the human voice, join the lady who Gilles Peterson has labelled the “the Grace Jones of Jazz” for a night of music.

From a published biography:

Lady Blackbird didn’t mean to soundtrack a revolution. But last spring, that’s exactly what she did. On 27th May 2020 the Los Angeles-based singer Marley Munroe released her debut single.

“It’s a brave soul indeed who not only tackles one of Nina Simone’s starkest tunes, ‘Blackbird’, but also calls herself Lady Blackbird into the bargain,” noted Blues and Soul at the time. “The original is a stripped-down chant with claps and hand drums, a field hollering protest song that will darken the skies of anyone’s heart. Lady Blackbird has the same urgent grace as Simone and she really takes what is an essentially acapella song and adds her own powerful magic and spirit to
proceedings… There’s an unmatched regality throughout, proving Lady Blackbird is an incisive and adroit singer. She channels the agony and thick despair on the lyrics, too.”

Simone released ‘Blackbird’ in 1963, at the height of the Civil Rights struggle. Almost six decades later, the killing of George Floyd, two days before the release of Lady Blackbird’s version, gave this new rendition a coincidental but no less stark, awful yet uplifting power.

“There was so much emotion there,” Lady Blackbird reflects now of a recording she and her Grammy-nominated producer Chris Seefried had laid down in the legendary Studio B (aka Prince’s room) in LA’s Sunset Sound. Jazz, she agrees, has protest in its DNA.

“Ultimately, I’m in this to entertain, not to be any sort of leader. That’s a huge responsibility that’s so deep within itself. I want to entertain and push people’s buttons. But having that platform, having people willing to listen to you and your music, that’s a responsibility – and one of using that opportunity to share your views.”

As it happens, in actual fact they’d recorded ‘Blackbird’ a few months previously.

“And unfortunately, and disgustingly, it did ring so fucking true last spring,” she continues with a hint of the soulful fierceness that, on stage, makes Lady Blackbird a wonder to behold. “It’s always been one of my favourite songs of hers. I’d listen to ‘Blackbird’ on repeat on my headphones for hours at a time, just feeling it, getting into the bones of it. “I could picture myself singing it onstage – I often do that, close my eyes and imagine me interpreting certain songs on stage. And I thought: this song has to be done.”

Lady Blackbird isn’t the Nina Simone of the Black Lives Matter era (she certainly wouldn’t call herself that). But she is the talent, and the force-of-nature, and the talk-walking personality, that Gilles Peterson has dubbed “the Grace Jones of jazz” – an accolade reinforced by the remixes of recent single ‘Collage’ by jazz and house heavyweights Bruise, Greg Foat and KDA.

And she’s the woman who can flex in other areas, too, as seen in the jaw-dropping version of Tom Petty’s ‘Angel Dream’ that she performed at the virtual Birthday Bash held last October in tribute to what would have been the late musician’s 70th birthday.

We can also just call her the best new voice of 2021, a transcendent performer of songs old and new, an artist whose approach, outlook and vibe is summed up in the title of her stunning forthcoming debut album.

Its 11 tracks have a sound, feeling and attitude that speak of Lady Blackbird’s deep experiences in music, stretching all the way back to infancy.

“I don’t ever remember not singing,” she says, recalling performances in church and at fairs from the age of five. “It’s what I knew how to do, and I don’t want to do anything else.”

By her early teens, Lady Blackbird was travelling to and from Nashville. She was signed to a Christian label but the only music that resulted was some work with rock/rap group DC Talk. After they split, she worked with former member TobyMac, appearing on his first four solo albums and touring together.

“But I realized that that whole Christian world, which my parents tried to place me in, was so goddam far from who I was. I did not want to do Christian music, I didn’t believe anything of what they did, and I quit the tour.”

A wise young soul already at the age of 16, she then found herself “in limbo, because I was in this contract till I was 18”.

Once legally an adult and free, she based herself out of New York while flying to and from sessions in LA. She was working with Jimmy Jam, Terry Lewis, Sam Watters, Louis Biancaniello, Tricky Stewart and The Heavyweights. A production deal led to a record deal with LA Reid’s Epic. But creative differences led to her parting ways with the label.

So, the deal ended “and it was back to the drawing board and working with different people”. One of those was artistturned-writer-and-producer Seefried, who’d been Grammy-nominated for his work on the debut album by Andra Day (soon to be seen as Billie Holiday in biopic The United States Vs. Billie Holiday).

On meeting Lady Blackbird, he recalls thinking: “Wow, I’m working with the best new vocalists there are – Andra and Lady Blackbird are two of the greatest singers on the planet.”

From Lady Blackbird’s point-of-view, “I fucking loved his shit!” she hoots, relieved to have finally found a musical partner who got her. “Chris listened to me, asking, was I feeling this vibe, or that vibe? He was able to dig inside what I was feeling. Next thing you know, he had some amazing sounds worked out. We really just connected.”

They took their time, working in Seefried’s LA studio, feeling out the bespoke musical path that would work with the fiercely individual performer. Finally, in hitting on the idea of stripping everything back, “we cracked the code”.

“I’d written a song, ‘Nobody’s Sweetheart’, a jazz ballad kind of thing, and asked her to do a vocal,” explains Seefried. “I laid the tune on her – and it’s quite a complicated piece of music – then I played it again. And she goes: ‘OK, I got it.’ And in two takes she nailed it, live. It’s a real natural genius kind of thing to have that kind of musicality intuitively.

That song, when he began playing it to people, stopped them in their tracks. “In fact, when I played it to my therapist, he started crying.”

“When you break a therapist, that’s when you know you’re winning!” Lady Blackbird laughs.

A sad, elegantly simple tune, ‘Nobody’s Sweetheart’ was, too, a pathfinder song, and also the first one they recorded (with, ultimately, on the finished album, a beautiful trumpet solo from the great New Orleans virtuoso, Troy “Trombone Shorty” Andrews). After working on big pop bangers, this was the motherlode. After going all out, they were going all in, deeply in, getting out of the way and letting shine the voice of Lady Blackbird.

For the singer, a proud member of the LGBTQ+ community, that approach, however, didn’t – couldn’t – diminish her onstage persona. “I loved my over-the-top costumes and all this elaborate shit on stage. Chris convinced me we could be jazz and still keep that attitude.”

Suffice it to say that, when Seefried played ‘Nobody’s Sweetheart’ to Ross Allen – the British label exec, DJ and crate-digger who’s signed Lady Blackbird to his new imprint Foundation Music – he was astounded.

“I also showed him this picture of her, this radical woman on stage, and it was from the back, wearing this incredible dress and Pattie LaBelle headgear. Ross was like: ‘She sings like that and looks like that? Fucking hell!’”

You can hear that personality in ‘Collage’. An instant earworm which she inhabits in multiple colours, it’s Lady Blackbird’s take on the “fucking quirky” James Gang original, a soulful psych-rock deep cut from 1969.

There’s more inspired reinvention on the aching ‘It’ll Never Happen Again’, written by Tim Hardin and which first appeared on the folk singer’s seminal 1966 debut. Forthright as ever, Lady admits, “that was one of the ones I didn’t like at first. It wasn’t boring, I just didn’t know how to give it some power or personality at first. But then I tried it, it was a beautiful session, and it’s ended up one of my favourites on the album. It just sounds magical.”

That spirit of adventure and invention is there, too, on ‘Beware The Stranger’. It’s a rerub of ‘Wanted Dead or Alive’, a rare groove classic recorded by funk/gospel collective Voices of East Harlem in 1973 and co-produced by Curtis Mayfield.

“It’s a version of a version!” she laughs. “We changed the title, the gender, everything! But again, when I first heard it, I just could not hear it. Then Chris cottoned on to the choir piece at the end and suggested we build from there. It was this gothic-type sound, and we rebuilt that choir just using my voice. When we took it to a dark and dangerous place, that’s when I liked it, and when everything else just happened. Taking them down a jazz route was just about interpreting them in a way that could make them fit on a Kind of Blue, Love Supreme kind of space”.

Rounding out the album are two killer cuts written by Lady Blackbird and Seefried, ‘Fix It’ and ‘Five Feet Tall’. The former is an elegant piano ballad that sounds like a Great American Songbook standard sung by a woman on the side of the angels. Her ability to nail the song in the studio in minimal takes was clearly something to behold.

“Deron had never met her before the session,” recounts Seefried, “and she was recording ‘Fix It’ in Lady Blackbird mode. And he was like: ‘Damn, she’s like artificial intelligence! She’s like an Avatar! This is unreal!’”

As for ‘Black Acid Soul’, closing the album, it speaks of both the “Jackson Pollock jams” Seefried describes in the studio and the mantric soul evocative of Hot Buttered Soul-era Isaac Hayes. Explaining how the song became the title and then, again, the vibe, Lady Blackbird says: “We used to hashtag #blackacidsoul, as our sub-genre of music. It just encompassed everything we were doing. It cemented all those ideas and genres in this made-up shit!

“And because ‘Blackbird’ is a great start to the album, because it gets dark and violent and goes somewhere spiritual, we wanted to tail the album with another expression of acid soul. So that became the title track at the end.” This is Black Acid Soul, and this is the first crucial album of 2021. Are you ready to fly with Lady Blackbird?