Attack of the Murder Hornets 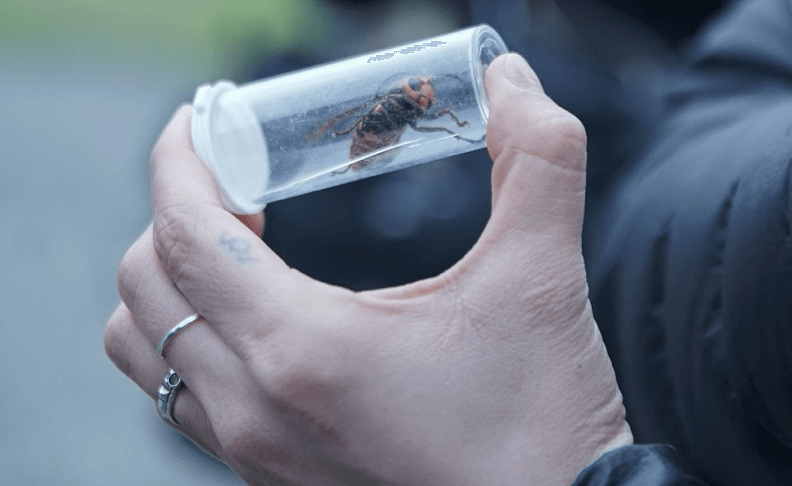 In November 2019, beekeeper Ted McFall was horrified to discover that 60,000 of his honeybees had been had their heads severed and their hive wiped clean. He had no clue as to what kind of creature was behind the carnage, until a looming threat provided him the answer: the Asian Giant Hornet. This dangerous, new, and invasive species has made headlines across the nation since its arrival in the U.S., specifically the Pacific Northwest, where the first nest was discovered in Blaine, WA. The all-new feature documentary, ATTACK OF THE MURDER HORNETS, by filmmaker Michael Paul Stephenson (Best Worst Movie, The American Scream) launched on February 20 on discovery+. It centers on a concerned crew of beekeepers and scientists who must work together to protect their quiet Washington community from the threat of the Asian Giant Hornet, known famously today as the “Murder Hornet.” The documentary is part of Discovery’s UNDISCOVERED, the Discovery documentary strand that explores some of our greatest mysteries, potentially rewriting the history books along the way.

“Murder Hornets” use their enormous mandibles to behead every honeybee they catch; a single hornet can behead 20 bees a minute, and a small group of hornets can destroy a hive of 30,000 bees in just 90 minutes. The danger of the hornet in the U.S. threatens our fragile food supply, putting the livelihood of honeybees — the world’s most important pollinator of food crops — at risk. A threat to a honeybee is a threat to all of us.

Interview with SAMANTHA SMART – Editor of ATTACK OF THE MURDER HORNETS. 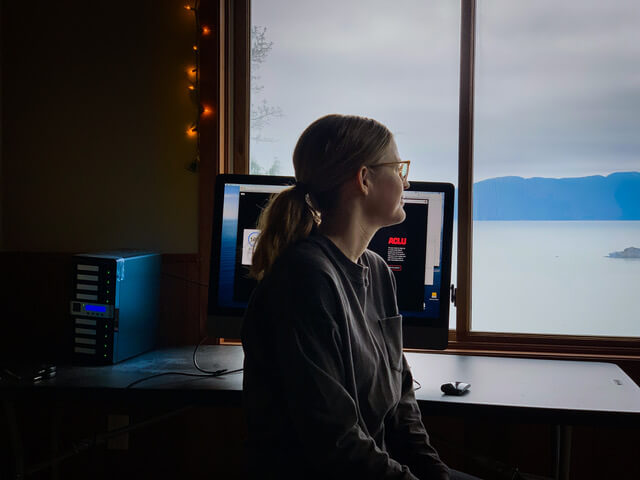 How did you come to work on this project?
I’ve been working with the director, Michael Paul Stephenson, for the better part of a decade now. He and I have such a great collaborative relationship, so when he asked me to move up to Washington to help him make a movie about murder hornets, I didn’t hesitate.

So you actually went on location for this shoot? Were you living with the crew?
I did move up to Bellingham, WA for this project which is somewhat unusual for an editor, or at least it is for me. Normally they would finish or get most of the way through the shoot before I come in, but with our original schedule being so tight, I began editing the first day they started shooting, so me being on location was crucial. I lived in a house that doubled as the post facility with two other crew members – John Lang, a producer on the film, and Rich Wong, the cinematographer. As an editor, I don’t always get to meet the crew. Rich, for example, I’ve been working with for years on many different projects, but I hadn’t met him in person until this project. I certainly didn’t expect our first meeting to be us living together for months, but it was incredibly fun. The whole crew was great and I’m really glad I got to spend time with them.

Did you ever get to see any actual murder hornets?
One day while I was working, the crew came by and called out, “we’re putting some hornets in the fridge so don’t bump the jar they’re in!”, then they left. I slowly snuck into the kitchen and opened the refrigerator and there they were! Two murder hornets just chilling in a jar. Not too many people can say they’ve had murder hornets in their fridge.

That sounds scary! Did anything else scary happen while you were there.
I wasn’t too scared of the murder hornets, but on night one in the new house there was the biggest spider I’d ever seen in my bedroom. It was my first time meeting John and Rich so I was pretty embarrassed that I immediately had to ask them to help me kill a spider. I think they thought I was being a baby, but when Rich came in he actually thought I was playing a prank on him and had bought a fake spider from a Halloween store. We tried vacuuming it up and it was literally stronger than the vacuum suction. It clung to the carpet for dear life but eventually the vacuum got it. And actually, over the course of this documentary I’ve come to appreciate and respect insects more, and I honestly regret killing that spider. But probably the scariest thing that happened while I was there, has to do with the podcast I host called Too Scary; Didn’t Watch. I love horror movies, so each week I watch one, then recap it for my co-hosts that are too scared to watch. Well, there were a few times that I was home alone when the rest of the crew was staying in Olympia for a shoot, and on one of the nights that I was home alone, I had to watch Paranormal Activity 2. In Los Angeles, I live in a tiny little apartment surrounded by other apartments, but now I was in this big empty, secluded house in the Pacific Northwest, and wouldn’t you know it, there was a thunderstorm that night. I don’t know if I’ve ever been so scared. I kept thinking, “Is this how regular people feel when they watch scary movies? This is horrible!”

Speaking of horror films, Attack of the Murder Hornets definitely has an element of horror to it, was that intentional?
– Yes, from the beginning we kind of imagined it as “a horror film meets Christopher Guest.” One of my favorite horror tropes is the killer’s POV shot, and we got some amazing hornet POV shots using a small drone. I think it’s a really fun device that adds suspense but also a bit of comedy. We also used a lot of horror movies as inspiration for the score. I used temp music from things like It Follows, Stranger Things and The Rental.

The music in this is great.
Our composer, Julian Cisneros, is INCREDIBLE. The first time I heard his finished score, I cried. I think he did such amazing work.

How did Covid impact the shoot?
We had to take weekly Covid tests, and of course there’s the fact that in a large percentage of the footage, people are wearing masks. That actually turned out to be kind of a blessing as an editor, as it’s a lot easier to cheat certain coverage if we need to.

How did you edit together footage when you had no idea what would be happening the next day?
It was certainly a challenge! Basically my process was to watch and log each day’s dailies, and keep thorough notes of what stood out to me as important story points, or good character moments. Part of the problem was that these characters were so compelling that there was an incredible amount of great footage. However, we realized pretty early on that the main driving story was going to be the hunt. So the million dollar question was – are they actually going to find a nest? We were always hopeful that they would, but at a certain point you have to start making backup plans and start asking – ok, how do we end this movie if they’re not successful? So you’re basically playing out various scenarios in your head and trying to plan as best you can for each (while hoping and praying for the one you want!) I don’t want to spoil too much, but I will say I’m very happy with the way it all ultimately panned out.

What was your favorite scene that didn’t make the final cut?
Like I said, the people featured in the film were so awesome that there was definitely a surplus of great footage. There were many scenes that we ended up cutting, but a favorite of mine would be a scene at Sven’s home. He’s the Chief Entomologist and he showed us his insect collection, then his young daughter showed us hers as well. It was a very sweet and heartwarming scene, but as we started leaning further into the horror/suspense aspects of the film, it just felt out of place. And I should add, that was not a scene I edited. As we got deeper into the shoot, it became clear we needed a second editor and so we brought on a very talented editor, Eric Martin. So shout out to Eric for editing my favorite deleted scene!

Your editing helps the film move at an urgent pace and keeps viewers glued to the screen. Can you tell us more about that?
There were times when this felt almost like a heist movie. You’ve all these people each with specific roles – Chris Looney leading the charge, Vikram assisting with the tech, Ruthie Danielsen and all the citizen scientists helping them cover more ground. There is a real urgency to what they’re doing, and the stakes are incredibly high, not to mention it’s all happening under intense public scrutiny. We wanted the audience to feel that urgency and root for these dedicated individuals. Normally I edit at a much slower pace and give things room to breathe, but for this we wanted to keep it moving as quickly as possible and keep viewers on the edge of their seats. 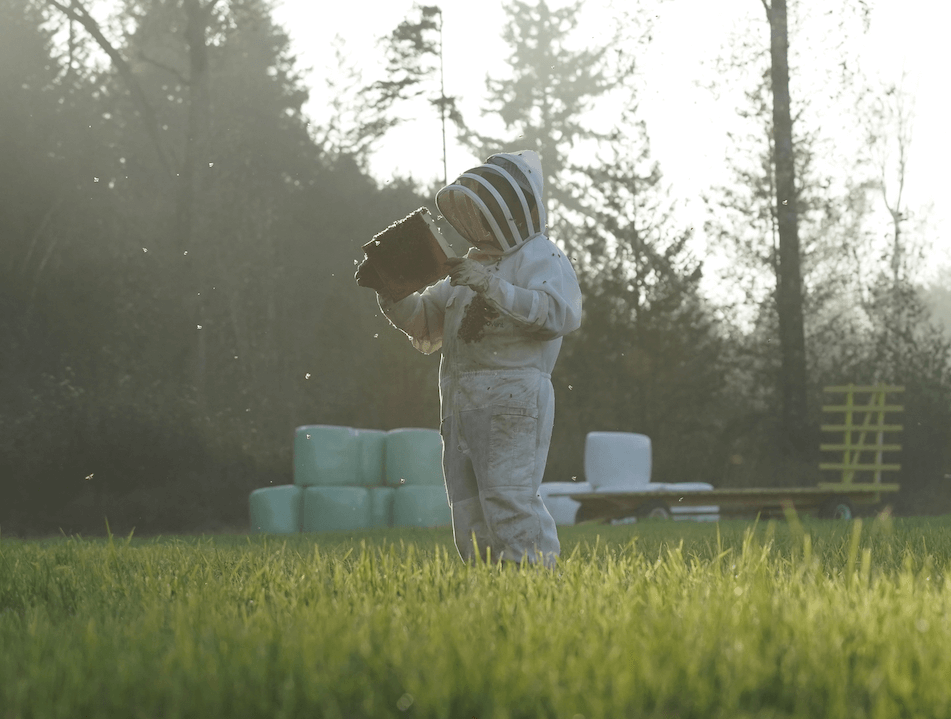 How do you feel about the hornets after learning about them everyday?

I’m definitely less scared of them then I was before this project. That goes for insects in general. Seeing how these entomologists just love insects and spend all their time with insects made me feel less grossed out by bugs and more fascinated by them. And while I obviously think the murder hornet, a.k.a. Asian Giant Hornet, does not belong in North America and must be eradicated, I also don’t think we need to have nightmares about them swarming and killing humans. Unless you stomp on their nest, you probably have nothing to worry about.

You can watch the trailer here