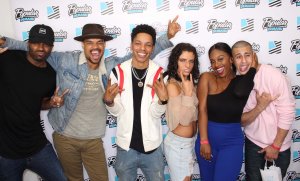 The second season of YouTube RED’s critically acclaimed series, “Step Up: High Water” has officially launched and the cast gathered for a private screening event to kick off the newest serving of episodes. Actor, Terrence Green, who plays “Rigo” on the show partnered with streetwear brand, Popular Demand, to host the screening at their screen room facility in Burbank, CA.

Additionally, Terrence Green premiered his first musical offering to this season’s soundtrack with the track “Take the Thrown” Check out the music video below: