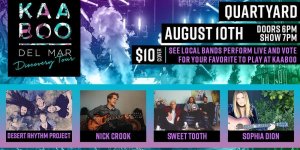 The fourth annual KAABOO Del Mar is almost here! The highly amenitized event, set to take place at Del Mar Racetrack and Fairgrounds in Southern California on September 14-16, 2018, has gone to great lengths to make sure that each attendee feels spoiled and is treated to a hospitality-driven experience that engages all five senses. At KAABOO multi-day annual events, guests enjoy a world-class music and HUMOR ME comedy lineup; an onsite Contemporary Art Fair in ARTWORK, plus a display of outdoor murals and installations; PALATE gourmet food and craft libation tastings; a Las Vegas-style day club called BASK, plus spa and relaxation services at INDULGENCES. KAABOO Del Mar overlooks the Pacific Ocean and enjoys pristine weather, ocean breezes, and numerous easy to access lodging options.

Over the last couple of months, KAABOO has also been offering a chance for local Southern California musicians to participate in the festival through their Discovery Tour program, which is a a unique program that is designed to showcase some of the amazing talent in our area. Every year, KAABOO has a stage dedicated to local and emerging talent. Three musical acts and one comedian will be selected as winners of the Discovery Tour, earning them the coveted opportunity to perform at KAABOO on September 14-16th, 2018, alongside the previously announced music + comedy acts in the lineup, including Foo Fighters, Imagine Dragons, Katy Perry, Robert Plant & the Sensational Space Shifters, Craig Ferguson, Iliza Shlesinger, Nick Offerman and more.

On Friday, August 10th, SweetTooth, Sophia Dion, Desert Rhythm Project, and Nick Crook will compete to win audience votes for the third and final music stop, and this Sunday (July 29th), comedians will then battle it out at the American Comedy Co. Details and ticket links can be found at www.kaaboodelmar.com/discovery-tour. Make sure to check out the TOURMALINE Stage and HUMOR ME at KAABOO to see these bands and many more local acts!