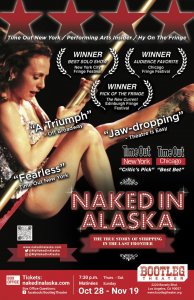 The recipient of the 2013 Award for Outstanding Solo Performance from the New York City International Fringe Festival, 2013 Audience Favorite Award from the Chicago Fringe Festival, 2014 Pick of the Fest Award from Edinburgh’s The New Current Magazine, and Time Out New York’s four-star Critic’s Pick and Recommended Show, “Naked In Alaska” is a visceral, fire-hot experience not-to-be-missed.

Valerie Hager is a former exotic dancer and award-winning writer-performer. She’s also a movement artist, a teacher, and founder of SOLOfire Workshops through which she teaches movement-based story-creation to individuals and groups across the U.S.

Bootleg Theater, named by Time Out as one of Los Angeles’ “best performing arts centers,” is a year-round, inclusive art space for original, boundary-defying live theater, music, and dance performances. Bootleg Theater is proud to present its first-ever SOLO QUEENS FEST, featuring solo performances by local female artists. Bootleg has a fierce belief in the power of women in Art to create change in the world, and this festival will celebrate women and their life experiences.

Bootleg Theater is located at 2220 Beverly Blvd, Los Angeles, CA 90057
Street parking and a free lot is available at the church across the street at the intersection of Beverly and Roselake.