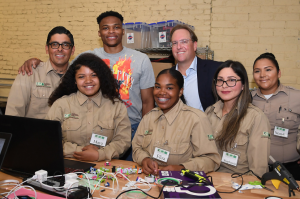 The LA Conservation Corps (the Corps) announces the launch of Westbrook/Brownstein Green Tech Program (WBGT), an initiative steered by a partnership between L.A. native and NBA superstar Russell Westbrook’s Why Not? Foundation and L.A. philanthropist Chad Brownstein.

The program will provide digital job skills to at-risk young adults in the Corps and break down the digital divide by providing skill training for green tech job opportunities to 500 Corpsmembers in Los Angeles.

The Westbrook/Brownstein Green Tech Program will expose Corps members to achievable career paths and provide technology related tools and education. The program will include classes that train students in computer literacy and introduce marketable skills like coding, drone piloting, and computer engineering. The partnership will also fund the second pillar, the Westbrook/Brownstein Green Futures Lab, where new computers and necessary equipment for intro classes will be installed. The third core initiative is the advanced drone piloting career path program. It will be the creation of a quarterly advanced training program designed to position students to enter the game-changing career path of drone maintenance and piloting.

“It means a lot to me to partner with Chad and the LA Conversation Corps on this new project. As a kid who grew up here in L.A., I know how important it is to feel supported and empowered by the community. By helping to provide these resources, my hope is that the youth will be able to see how bright their future can be and expand the vision of what they think they’re capable of” said Westbrook.

An initial donation will be facilitated by Russell Westbrook’s Why Not? Foundation and Chad Brownstein; with their robust network and partners, they will continue to fund raise for additional programming.

“It’s an honor to work with Russell who has a track record of benefiting at risk youth. This partnership is a wonderful opportunity to positively contribute to a city we love” said Brownstein.

“The Corps family is so grateful for and energized by Russell and Chad’s commitment to our Corps members” shared Wendy Butts, CEO of the L.A. Conservation Corps.  “For over 30 years, the Corps has championed the belief that building a young person’s confidence in themselves and opening their eyes to their educational and career possibilities can change their world. By investing in the technical skills needed to pursue careers in the growing green sector, Russell and Chad are helping Corpsmembers change everyone’s world.”

Russell Westbrook, a UCLA alumnus and Los Angeles native has always been passionate about empowering children in under-served communities. The mission of the Russell Westbrook Why Not? Foundation is to inspire the lives of children, empower them to ask, “Why Not?” and teach them to never give up. The foundation works to help children that are facing hardships of any kind, and when faced with that adversity, fight to succeed and to never give up. Russell Westbrook and his brother were taught to ask, “Why Not?” every time they were told they could not do something.  It is this encouragement and strength that Russell and his family want to spread to children across the country. Founded in 2012, the Russell Westbrook Why Not? Foundation is dedicated to supporting community-based education and family service programs while encouraging youth to believe in themselves.

Chad Brownstein has been a leader in LA philanthropic endeavors for two decades, including being an initial member of the 2028 LA Olympic Committee. Brownstein has an established relationship with the Corps, as he previously served on its board as finance committee chair. He has also been involved in positively affecting the lives of over 1,000,000 at-risk youth in under-served areas of Los Angeles.

The launch of the Westbrook/Brownstein Green Tech Program took place Monday, August 19, 2019 at 9:30 AM at the LA Conservation Corps’ John Van de Kamp Center, with both Westbrook and Brownstein participating in a tour of the facilities.