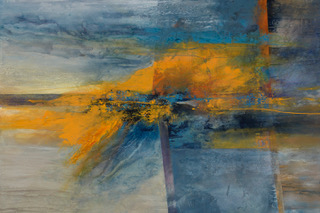 Walter Erra Hubert is a Pasadena-born, internationally-recognized artist working in the mediums of acrylic paintings, mono prints, resin and mixed media. Walter chose to self-isolate in 2018, two years before the international lockdown, resulting in his latest striking body of work Promising Skies, which reflects a world moving towards a new reality. The large-scale art works are realized in acrylic while the show will also feature his works that incorporate resin and mixed media. All of the art will be showcased at Building Bridges Art Exchange’s Santa Monica Gallery.

Born to Italian immigrant parents, Walter is heavily influenced by his U.S. and Italian roots and straddles both worlds. His Pasadena studio provides space for exploration inspired by the expanse of the metropolis while his home and studio in the Italian countryside allow for a sense of separation associated with nature and introspection. Walter’s Italian heritage and 30 years of experience using varied artistic mediums appealed to Argentinean Curator Marisa Caichiolo who actively seeks to showcase a diverse range of artists from around the world. “Walter’s eerily-timed decision to self-isolate inadvertently became emblematic of a universal experience and, during that time, his quest to connect with the core of his being ended up producing his strongest and most significant body of work, which we’re thrilled to showcase in Los Angeles”.

Walter’s self-imposed lockdown began at his Pasadena studio and continued at his studio in his home in rural Italy. His isolation resulted in these multi-dimensional, multi-layered works . The magnificent large canvases invite the viewer to embark on a journey of discovery through Walter’s impressive brush work, dripping paint and penetrating energy.

Walter’s expression is deeply influenced by the subconscious, a comparison that can be drawn to current events of the pandemic and post-pandemic era. The magic of nature and journeys of the spirit are at the core of Walter’s work.  Promising Skies encapsulates Walter’s vision with imaginary and mystical elements.  He creates paintings by merging a multitude of tools, including everyday items such as spatulas, wood carving tools and hair dryers and the fluidity of the materials captures the artist’s strokes and movements. Walter muses, “I am in constant exploration of the tension we perceive between the realms of matter and spirit. I hope that the viewer senses that language and is drawn into the relevance of the journey.”

Although the current global outlook may be seen as bleak and unpredictable, Promising Skies reflects a world moving towards a new reality with a sense of hope. In each translucent piece, an ocean of opportunities, portals and evocative lights can be seen beckoning toward the future, representing the promise of new beginnings. Connecting to the past and creating a bridge to the future is the ideal path for Walter to engage with today’s collective consciousness. Explosions of light, volcanic eruptions, deep water currents and sensual feeling inspired by connections between the elements are among the bounty of natural phenomena that nourish his perspective and vision of the universal forces of Mother Earth.

Walter was recently selected as an American artist to show at the 2022 9th Beijing International Art Biennale in China. The exhibition is currently being held at the National Art Museum of China in Beijing through March 2022. The curatorial theme is The Light of Life and the piece selected by the curatorial committee is “The Light Portal”.  This piece was completed in 2021 by the artist as part of the series, “The Era of Solitude”.  He has had several solo shows in Europe and his paintings can be found in the permanent collections of the M.A.C.I.S.T contemporary art museum in Italy, and venerable institutions including the L.A. Times Mirror Building. Walter was also recently chosen as a featured artist for a special Miami ART BASEL publication.