Seal at the Hollywood Bowl 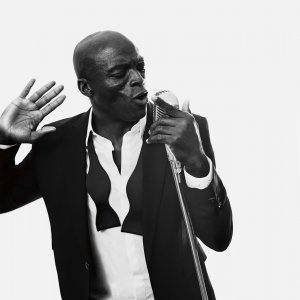 Amidst cheers and applause, British R&B singer, Seal strolled confidently on stage and, right off the bat, began charming the audience with his soulful rendition of “Luck be a Lady”. Welcome to a new side of Seal and his tenth studio album “Standards”. This is an album that Seal has always wanted to make because he grew up listening to music from the rat pack era, and for him, recording these classic tunes has been a lifelong dream. Seal said “It was a true honor to collaborate with the same musicians who performed with Frank Sinatra and so many of my favorite artists, in the very same studios where the magic was first made – it was one of the greatest days of my recording career.”

Who knew that Seal was a crooner? Well, he is, and a mighty fine one at that. His voice is rich, velvety and flawless, his style is sassy, his look debonair, and this man can handle a room – or should I say a bowl? Bending down to sing to the ladies in the front and shaking people’s hands, Seal utilized the entire stage, the catwalk strip, and even ventured off stage altogether to further flirt with the audience.

Between songs, his laid back banter made him even cooler. Listening to him, one gets the feeling that this is a man who is sincere and has a gentle, generous spirit. He jokingly told the audience, “Hello Los Angeles, well I know most of the people here, yeah, you guys all hit me up for tickets.”

Things got a little more serious when Seal talked about a recent bout of depression and recanted a day when he listened to “That’s Life” at full volume. “It helped” he quipped, and proceeded to perform the song with the magic of the Hollywood Bowl Orchestra behind him, conducted by Thomas Wilkins. Seal likened playing with the Hollywood Bowl Orchestra to driving a Rolls Royce. He clearly loved the material he was performing and who he was performing it with.

Halfway through the show, Seal announced that a very special guest was in the house; someone who had, in part, been responsible for him being a musician. It turned out to be none other than Joni Mitchell, and as the cameras swung around to find the icon seated in the audience, Seal got everyone to sing the line: “paved paradise, put up a parking lot.”

Towards the end of his show, Seal broke out his hit songs “Kiss from a Rose”, and “Crazy”, and last but not least, invited his 8-year-old daughter up on stage to play piano for a short performance of “Superstition”.  For an encore, it was “Rebel Rebel” to honor the late David Bowie.  No matter what style: classics, pop, rock, ballads, covers – Seal handles them all with vibrant, powerful vocals and ebullient showmanship. Seal is the real deal.