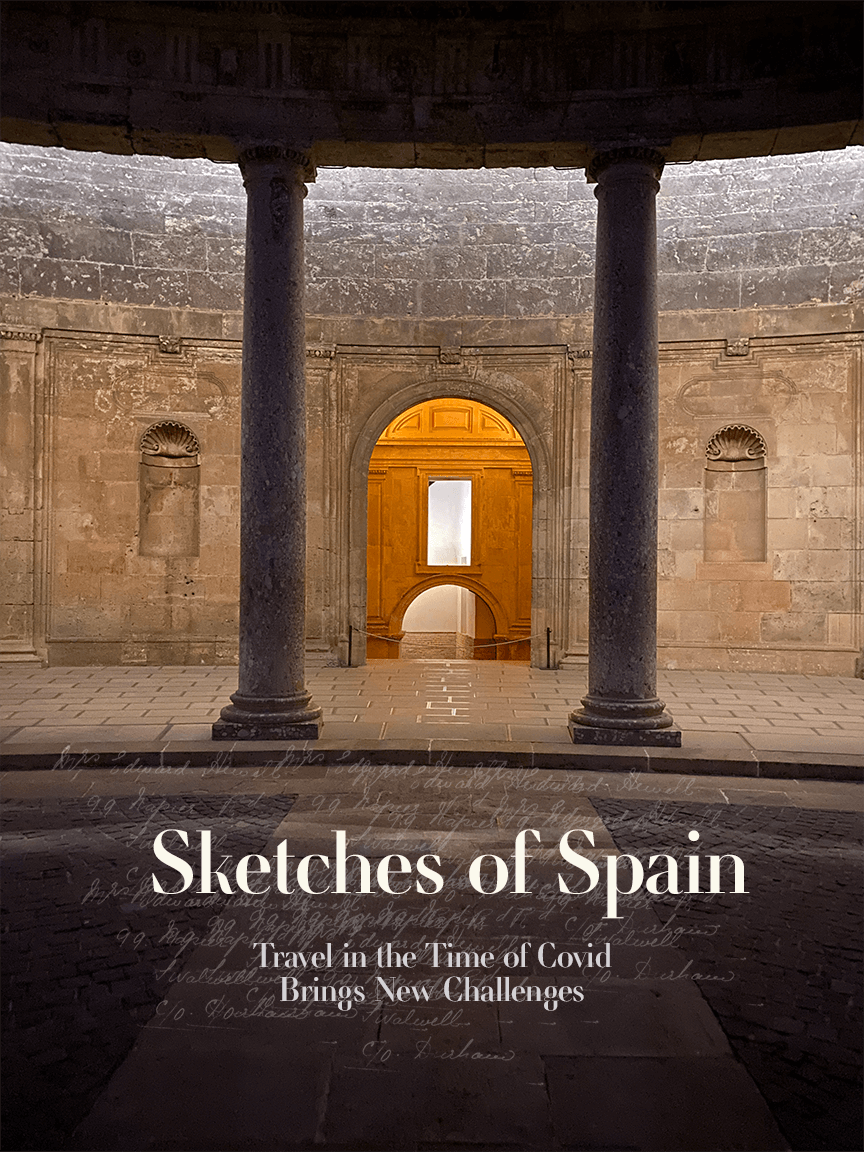 It was a crazy idea.

Travel the length of Spain from the South to the North in a very hot August.

What is clear is that travel in the year 2021 was not like any other year—we’re not just talking the masks, the social distance, the lessened crowds, but the fact that flight took a strange turn, and not for the better.

We leave Los Angeles, on a bright August day. The airport feels usual, there are cars and crowds, kisses and waves, people coming and going. Security is as it always is, and the casual glance at the flight board suddenly registers a delay. We are to head to Dallas and catch a flight to Madrid, all in the span of 45 minutes.

It does take a least half an hour for the plane to leave the ground and touchdown in the sweltering heat of Dallas, Texas. The stewardess erroneously mentioned that people with connecting flights would be given priority—not sure. We slowly make our way out and as it turns out, and head to another terminal. Running through the airport we are accompanied with fellow passengers who are also attempting to make their connection. We arrive at the gate. It is seven minutes after the departure time—they are gone. American Airlines.

Dallas. American provides us with hotel lodging and a voucher for a driver to get us to the near town of Irving, Texas. We drive past the George Bush Turnpike—we really are e in Texas.

A pleasant enough hotel in the middle of nowhere, we make plans for the next day as we will not be leaving for Spain till 5.

Dallas. The first stop is the site of the Kennedy assassination. An event we have seen over and over in films, documentaries, resurrected every November 22. It is a tourist attraction, no not widely visited at this time, be it the heat, the Covid.

There are x’s in the street, we are told put there by conspiracy theorists indicating that Lee Harvey Oswald could not be the lone killer. In Dallas, nearly everyone we ran into called him the “accused assassin”. They have their doubts. It’s a sad, quite a boring little stretch of road that changed history.

Its 6:00 and time for drinks at El Corte Inglés, Spain largest department store with a rooftop experience similar to the one found in Century City.

This experience is wild though. It is prime time, people are happy finally out of their houses, enjoying the view, the cocktails, and the company. It is popular. Find a chair in the outside ring is impossible. People jockey, watchful of movements to din that moment to claim the space. People are casual, leisurely in their drinking and time—it’s simply too pleasant to leave.

Madrid. A city of a thousand dances, mostly flamenco. A thousand hotels, parks and restaurants—it’s a big city. We found great comfort in H10 Villa de la Reina, hotel situated in the middle of the city on the Grand Via. Luxurious and even glamorous the hotel has an old-world charm combined with modern amenities—and, you walk out the door into the hustle and bustle of a Madrid Summer day ready to shop, visit the museums and play.

Art. At the Palacio de Gaviria, Ta 19th-century palace located on Calle Arenal, a stone’s throw from Puerta del Sol, is showing an exhibit about gay life in Madrid in the 1920s. The art is great, the exhibition, which seems thorough does not contain one word in English. No matter, the “international language of love” was being spoken at the Boyberry bar, right behind the El Corte Inglés, which turns out to be, the bohemian Lavapiés neighborhood. A small bar, the Boyberry is what is known as a cruising/darkroom bar. It works like this: buy a drink from a very friendly waiters, and head to the literal dark corners, which are cruising areas, glory holes (don’t ask) and a labyrinth of rooms that lead essentially to nowhere. A staircase takes one down, into the depths where men silently mingle, adjusting to the darkness in search of something. The ads, of course, promise a pride of young lions, full-haired muscle boys, shirtless, eager to engage, Maybe. It is the time of Covid, social distancing and such. No asking for vaccination records in the dark here. We move on.

What does become apparent about Spain and frankly about most of Europe is that they LOVE their cafes. A large portion of time is spent in these outdoor cafés, or terraza. Maybe its the Summer Wind, the ever-rising temperature (it hit 100 degree Fahrenheit quite often) on cobbled stone streets, but the umbrellas are unleashed, the tables set and the people arrive. So many asked if Covid was an issue (in the States) and yes, but the great news is that Spain was diligent in its keeping the masks on, not allowing crowds of large sizes to gather.  Was it different? Did Europe, Spain feel different? Yes, the crowds were not as intense; the ferries between Spain and Morocco was not working; for the most parts hotels were ample (except in the seaside resorts). 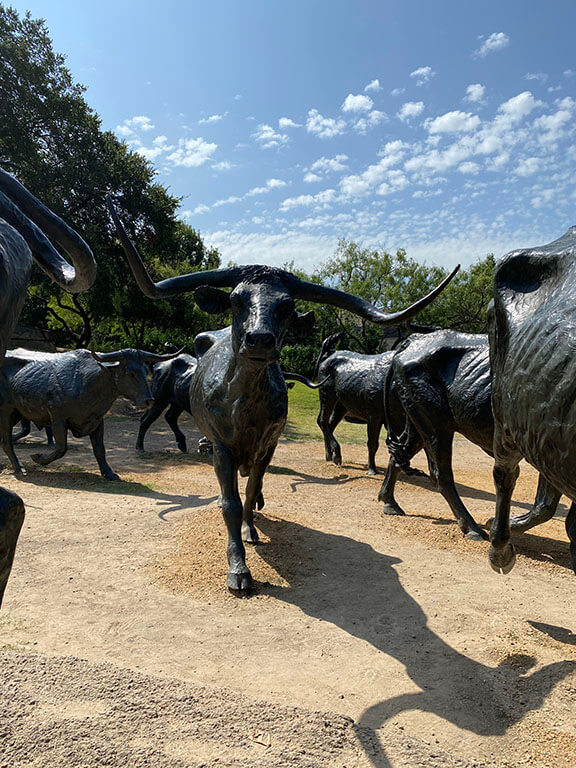 We’re in Pioneer Plaza, one of the most famous sights in downtown. Named after the pioneers that founded Dallas in 1841, the plaza, with its bronze sculptures, is one of the most-visited tourist spots in the city.

The bronze, life-like bulls built in the ’90s to honor the cattle drivers who passed through Dallas on the Shawnee Trail in the mid-1800s. No bull. 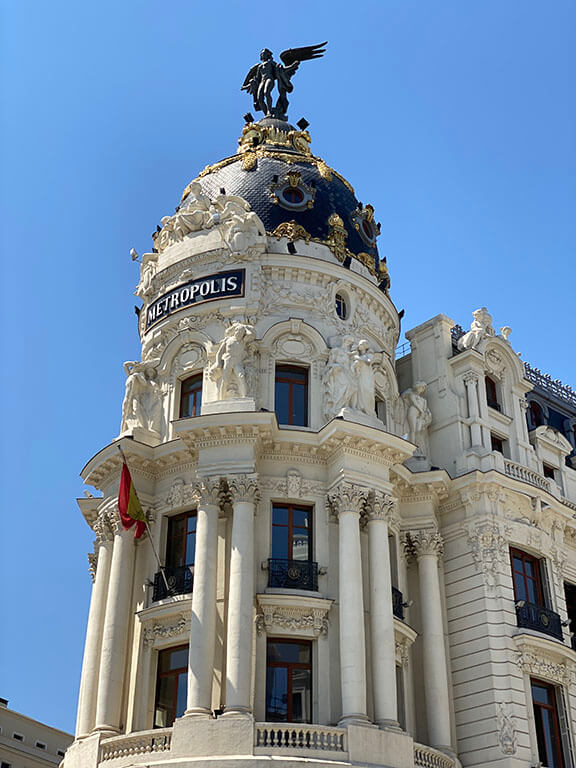 The Metropolis Building located in Gran Vía and Alcalá Street, 2014 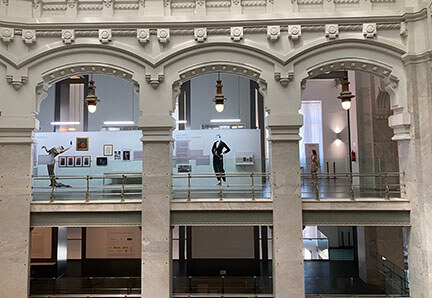 The fantastic exhibit that had so little information that even now you cannot find out much about it. 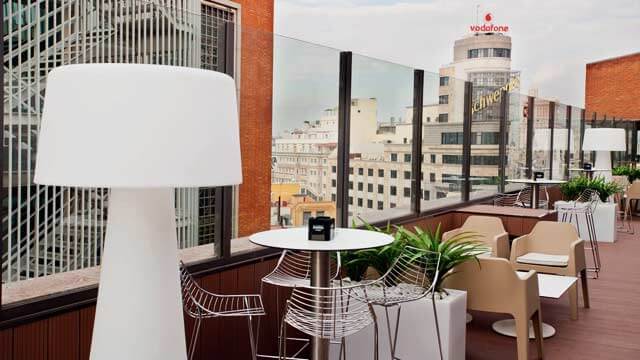