With Spring Break upon us and Summer not far behind, there’s one thing that many people of all ages have searched high and low for: the hangover cure. From old wives tales and urban myths, people have gone to incredible lengths to prevent alcohol’s worst side effects, and now a fix is here in official capacity.

Sober Rush, a gaming-changing new remedy from Fulgent Life, a Southern California biotech company, was developed at the UCLA Cancer Center and is different from any other remedy. While it is widely believed that dehydration is the primary cause of hangovers and that hydrating is the key to alleviating one’s symptoms, the true cause of discomfort is the build-up of a toxic byproduct of alcohol called acetaldehyde (AH-SEE-DAL-DEE-HIDE). Sober Rush is taken before your first drink and again optionally (if your consumption has been heavy) after your last one. It uses a coenzyme called NADH that is naturally present in the body to activate the break-down of acetaldehyde.

Available in supplement form, here’s how the scientists break it down:

· When you consume alcohol, your liver uses an enzyme called alcohol dehydrogenase to break the ethanol down to acetaldehyde – a chemical that is up to 30x more toxic to the body than ethanol itself.

· Acetaldehyde is what causes most hangovers. Our research has shown that this chemical is potentially carcinogenic, which is even more reason to try to help your body eliminate it quickly.

· Another enzyme produced by the liver is acetaldehyde dehydrogenase. This enzyme takes the toxic acetaldehyde and turns it into harmless carbon dioxide and water.

· Sober Rush helps speed up the metabolization of acetaldehyde in the liver, by up to three times so that after only four hours, the toxic acetaldehyde will have undergone most of its conversion into non-toxic acetic acid. 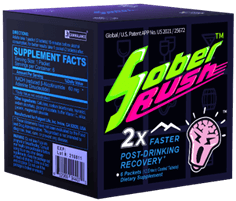 “By preventing most of the negative effects from alcohol from ever occurring, Sober Rush allows people to experience and enjoy alcohol more positively,” says Dr. Yong Wu who published a paper in The Journal of Functional Foods about his research. Dr. Wu is an Associate Professor at the UCLA David Geffen School of Medicine, UCLA Johnson Comprehensive Cancer Center; and the Core Director for the Drug Discovery Program. “NADH is the first discovery in the world that can be applied to unravel alcohol-induced liver damage,” said Dr. Wu.

Sober Rush is 2x faster at metabolizing alcohol than your body can on its own, and indicators of liver damage showed no significant changes when alcohol was consumed with Sober Rush.

Following years of research at the UCLA Cancer Research Center, Fulgent Life has received overwhelmingly positive feedback from those who have tried Sober Rush and confirmed its miraculous abilities.

Sober Rush is available on Amazon, Yamibuy.com and in several liquor stores, smoke stores and supermarkets in California, Seattle, Hawaii and New York. You can learn more by visiting the Sober Rush website, here.