The Get Down Goes Down 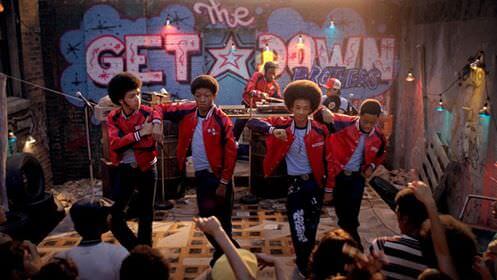 I was hooked. When “Books” Ezekiel Figuero read a poem with his emotionally-charged voice, it was poetry, rap and suddenly, I started to understand something about a culture that had evaded me. With the final episode now aired, we can speak to the merits and trials of this great experiment in television.
It was flawed, to be sure: A lot of storylines, a very weak gay tangent that was never realized, too much production, cartooning and cliches all spun on the head of a needle that could never decide where it wanted to go, but the ride was energetic, thrilling and if you were there, essentially the truth.
The last episode “Only From Exile Can We Come Home” was all the series wrapped into one big conclusion. but with such a delightful silliness ( imagine MX Justin Vivian Bond meets Jobriath tryout meets pop impresario, Robert Stigwood, at the Chelsea Hotel, of course!) that the show should conclude with one over-the-top last community rap, potential demise of our beloved little gay character, the bad guys turning good, it was all simply as Bette Davis once said: too much.
And it will be missed.
There are odd parallels to the other TV series, Empire, which in its third season has managed to stay afloat despite its deflated and contrived storylines — and a cast that feels exhausted. In some ways, Empire is where The Get Down leads to— a corporate culture of rap music. Where The Get Down was about the rise of Rap Music, Empire is the capitalistic result.
Empire lives while the Get Down, the most expensive Netflix series, $120 million to produce, goes to the place where great TV shows fade away.