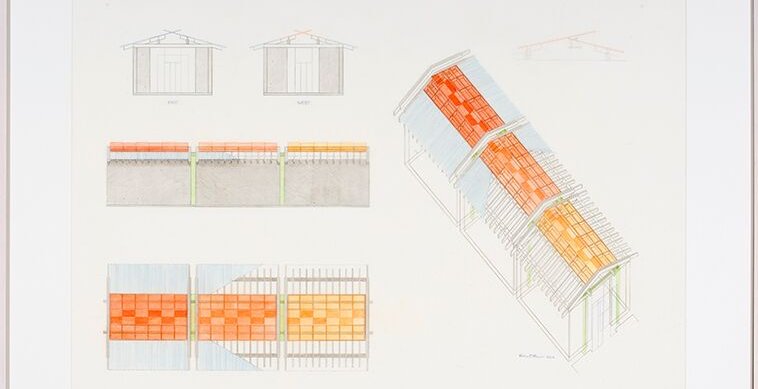 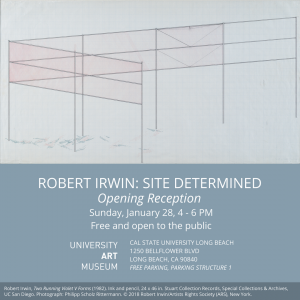 Irwin: Site Determined, exploring outdoor environmental projects.
See the first exhibition to probe four decades of the artist’s evolution
through rare drawings and models. A rare look into the inner workings of an iconoclast.
The University Art Museum (UAM) at California State University, Long Beach (CSULB)
examines the practice of one of the most significant American artists of the postwar
generation in Robert Irwin: Site Determined. This exhibition traces Irwin’s process
development as he embraced the ambient environment itself as his medium in his outdoor
site-responsive projects.

Robert Irwin: Site Determined reveals the artist’s process and demonstrates how
he used landscape as muse and upheld observer as collaborator. It becomes
clear, while viewing the multitude of the artist’s plans, that Irwin sees plays of
light and spatial shifts as opportunities for a particular type of discovery, from
visual perception, to environmental participation, to situational revelation. The
artist establishes a new space for interaction-driven creative insight. With
reverence for the outdoor environment comes a new way of art making—one
that is intimate and full of affect. The story of Irwin’s growth is accompanied by
the journey of the viewer, as they come to understand how their perception
plays a role in art appreciation—an appreciation that contributes to a collective
sense of place. Robert Irwin: Site Determined allows the viewer to stand
alongside Irwin in these aesthetic inquiries, to recognize their body in space and
realize the profundity of their own dynamic interactions with environment
around them. 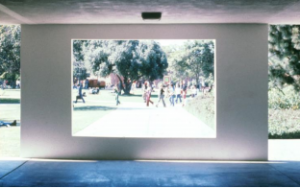 Robert Irwin: Site Determined begins with his 1975 drawing for Window Wall, in
the moment when Irwin “broke the frame,” turning the ambient environment
itself into his medium. The exhibition traces his continued site-responsive
experimentation over several decades, examining the development of projects
now beloved, such as the Getty Central Garden and Untitled (dusk to dawn) in
Marfa, Texas, as well as projects that were never actualized. Unrealized projects,
like the Arts Enrichment Master Plan for the Miami International Airport,
are unknown to the public, and these drawings and models are the only way
someone can experience them. The artist writes that site determined art, “draws
all of its cues (reasons for being) from its surroundings. This requires the process
to begin with an intimate, hands-on reading of the site.” “A quiet distillation of
all of this,” he adds, “determines all the facets of the ‘sculptural response.’” In
this way, the artist relinquishes agency to the environment itself, commits to a
conditional practice, and becomes a leading voice in contemporary art. 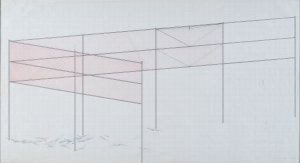 Robert Irwin: Site Determined invites the visitor to witness Irwin’s thinking as he
developed unique responses to different sites. Almost all the drawings and
architectural models of projects dating from 1975 to 1982 are in the context of
university campuses, where foot traffic would energize the works. The figure
above shows his drawing for Two Running Violent V Forms, with its initial pink
coloring. The project was installed within a wooded area on the campus of UC
San Diego. Irwin shifted his color choice and highlighted the natural blues of the
site; indigo transparent scrims pulled tautly between seven poles captured the
sky within the trees. Here we see the artist’s penchant for reframing the
landscape to create a new sense of the environment.
The infinite possible perceptions of the micro and macro create the logical
framework for the artist’s ambitious Miami International Airport commission
proposal; derived from the tropical South Florida surroundings, the project plans
showcase the artist’s sense of aesthetic order, from petal, to stalk, to stream.
Although the project was never realized, the care with which creative choices
were made is clear in these drawings, in each element snaking from the
terminals to the gardens. In the Central Garden of the J. Paul Getty Center, Irwin
applied the lessons of the Miami project with spiraling greenery around a
walkable labyrinth. Several drawings and an architectural model guide the viewer
through the developing conception of Irwin’s monumental, “modern garden,” as
he termed it. 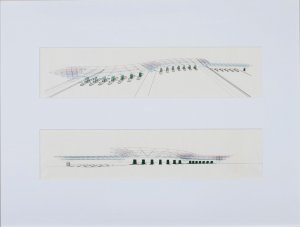 Robert Irwin: Site Determined also draws parallels between the artist’s aesthetic
evolution and widening conceptions of his practice. The exhibition underscores
his exploration of chromatic vibrancy and development as a draughtsman in the
planning of his most ambitious projects. The UAM invites the viewer to observe
the artist’s increasing creative freedom and expanding artistic range.
The exhibition culminates with twenty drawings and two architectural models for
one of Irwin’s most important site-determined works, Untitled (dusk to dawn),
completed in 2016 in Marfa, Texas. The project, at one time drawn with bright
orange hues, was ultimately built in a monochromic palette upon the ruins of the
Fort D.A. Russell hospital building on the campus of the Chinati Foundation.
Although he ultimately decided against the use of color as shown here in Marfa
Color Plan (2002), Irwin used the lack of roof and windowpanes to his advantage;
hanging translucent scrim panels in the black and white hallways, the artist
created an illuminated and ephemeral space that mediates between indoor and
outdoor. The crawling dance of light and shadow in this acclaimed project
creates its own color, when examined closely. The Chinati Foundation building’s
art and architecture inspire long, lingering looks, deep reflection by the viewer,
and represent a high point in the artist’s esteemed career. The drawings
presented in the exhibition lead the viewer through the artist’s process as the
project evolved, giving the viewer a rare glimpse into Irwin’s thinking in the
development of his masterpieces. 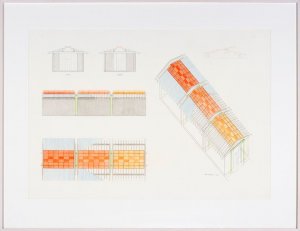 This exhibition is organized by the University Art Museum, CSULB, and is curated
by Dr. Matthew Simms, Professor of Art History, CSULB. Simms is editor of
Robert Irwin, Notes Toward a Conditional Art (Getty 2011) and author of Robert
Irwin: A Conditional Art (Yale 2016).

The exhibition opens to the public on Monday, January 29
and is on view until April 15, 2018, after which it will travel to the Pratt Institute
of Architecture.

Acknowledgements
The UAM would like to extend a heartfelt thank you to those who generously
provided financial support to the exhibition and catalogue publication.
Exhibition, publication, and programming funding was granted by the
Contemporary Collectors of Orange County, the Pasadena Art Alliance, the
Graham Foundation for Advanced Studies in the Fine Arts, the Port of Long
Beach, the Arts Council for Long Beach, the City of Long Beach, and the Miller
Foundation. Additional support was provided by the Museum Studies Program at
the CSULB; the CSULB Instructionally Related Activities Fund; CSULB Associate
Students, Inc.; the Ware Endowment; the Charles and Elizabeth Brooks
Endowment; the Constance W. Glenn Fund for Exhibition and Education
Programs; Dr. Ronald and Sylvia Hartman, Donna Mills, and Brian Cooke.
The “Window Wall” conservation project is made possible by generous funding
from the Institute of Museum and Library Services, Elaine Ridder, Tom and
Barbara Peckenpaugh, Dr. Ronald and Sylvia Hartman, Michael and Susan Davis,
Michael and Lynn Stearns, Helen and Stanley Molles, and Judy Ross. The UAM is
also indebted to the Getty Conservation Institute, Rosa Lowinger and Associates,
and Facilities Management at CSULB for partnering with us on the conservation.

Join us for an exhibition walkthrough with Art History Professor Matthew Simms,
Curator of Robert Irwin: Site Determined. Professor of Art History at CSU Long
Beach. Simms holds a PhD in Art History from Harvard University (1998). In
addition to being author and editor of the aforementioned leading books on
Irwin, he also conducted a landmark oral history interview with Irwin under the
auspices of the Archives of American Art, Washington, DC (2014). Most recently,
Simms authored of the first scholarly monograph on Irwin’s art and career,
Robert Irwin: A Conditional Art, published in 2016 by Yale University Press.

The UAM and the Department of Design have partnered to present a talk by
Walter Hood as part of the Duncan Anderson Design Lecture Series.

Walter Hood is the award-winning Creative Director and Founder of Hood Design
Studio in Oakland, CA. He is also a professor at the University of California,
Berkeley and lectures internationally. Hood Design Studio is tripartite practice,
working across art + fabrication, design + landscape, and research + urbanism.
The resulting urban spaces and their objects act as public sculpture, creating new
apertures through which to see the surrounding emergent beauty, strangeness,
and idiosyncrasies. The Studio’s award winning work has been featured in
publications including Dwell, The Wall Street Journal, The New York Times, Fast
Company, Architectural Digest, Places Journal, and Landscape Architecture
Magazine. Walter Hood is also a recipient of the 2017 Academy of Arts and
Letters Architecture Award.

Sally Yard is Professor of Art History, University of San Diego. She writes about 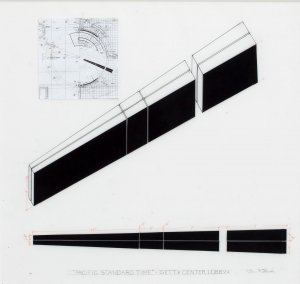 art since the Second World War and researches the interconnectedness of public
art, its time, and its terrain. Yard is the author of Christo: Oceanfront (Princeton
University Press) and contributing essayist in Robert Irwin (Museum of
Contemporary Art, Los Angeles and Rizzoli, 1993); Museum as Muse (Museum of
Modern Art, New York and Abrams, 1999); along with Private Time in Public
Space (1998), Fugitive Spaces (2002), and A Dynamic Equilibrium: In Pursuit of
Public Terrain (2007).

About the Catalogue – Robert Irwin: Site Determined
Robert Irwin: Site Determined is the first book to focus on the role drawings and
models have played in the artist’s creative process. It includes projects on
college campuses; his major, yet never realized, commission for the Miami
International Airport; the Central Garden at the J. Paul Getty Museum in Los
Angeles; and the Chinati Foundation in Marfa, Texas, a monumental artwork that
brilliantly connects viewers to the land and sky, and one of Irwin’s most
ambitious works to date. Throughout this collection of drawings and models of
magnificent, groundbreaking projects, readers will come to see Irwin as a
visionary artist and brilliant draftsman.
It is published by the University Art Museum at California State University, Long
Beach and DelMonico Books•Prestel. The richly illustrated catalogue includes
historical and interpretive essays written by specialists on Irwin’s art. The
authors include:
Matthew Simms, Professor of Art History at CSU Long Beach.
He is the editor of Notes Toward a Conditional Art: The Writings of Robert Irwin
(Getty, 2011). He recently conducted a landmark oral history interview with Irwin
under the auspices of the Archives of American Art, Washington, DC (2014).
Sally Yard, Professor of Art History at the University of San Diego.
Yard holds an MA and a PhD in Art and Archeology from Princeton University.
Her work focuses on the relationship of art and public space. Selected published
works include essays in Robert Irwin (Museum of Contemporary Art, Los Angeles
and Rizzoli, 1993) and A Dynamic Equilibrium: In Pursuit of Public Terrain (2007)
Ed Schad, writer and curator living in Los Angeles. He writes for Art Review, Art
Slant, and The Brooklyn Rail, among other publications. He is Associate Curator
and Publication Manager at the Broad, Los Angeles. He holds an MA from the
School of the Art Institute of Chicago.